They had retro consoles, arcade cabinets and elaborate drinks on the menu. I had been sitting there for a few years when inspiration struck. “Wouldn’t it be funny if…”, as many ideas start, “… someone made a game about all this?”. I gesticulated vaguely in the direction of everything while looking like a question mark followed by an exclamation mark.

The road nearby had, over the previous few years, had several different pop-up cafés and concept stores of all kinds.

There was the adult soft play area (that’s the right term, it’s not as sexy as it sounds) with cocktails and a ball pit down the road called Ballie Ballerson. Later came Hammerschlagen, a bar with a game about hammering a nail into a log.

Some were more successful than others, but if you had asked me, I would not have been able to predict which ones.

I thought that since I thought it would be funny for someone to make a game about all this, and since I make games, that ergo it would be funny if I made a game about all this. Logic really, can’t fault it. I vaguely convinced a few friends to help by charm and mostly bribery, and we set out to try to make what they call a “vertical slice”, a playable version that sort of had the whole idea in there. We drank ourselves into the creative zone by way of beers, assassins’ meads and whatever else was on the menu that evening, and opened up Notepad, the true professional’s note-making tool. The result was about 700 lines of gradually less coherent ideas, some just a single word with no context, that have since become the Magna Carta of the game. 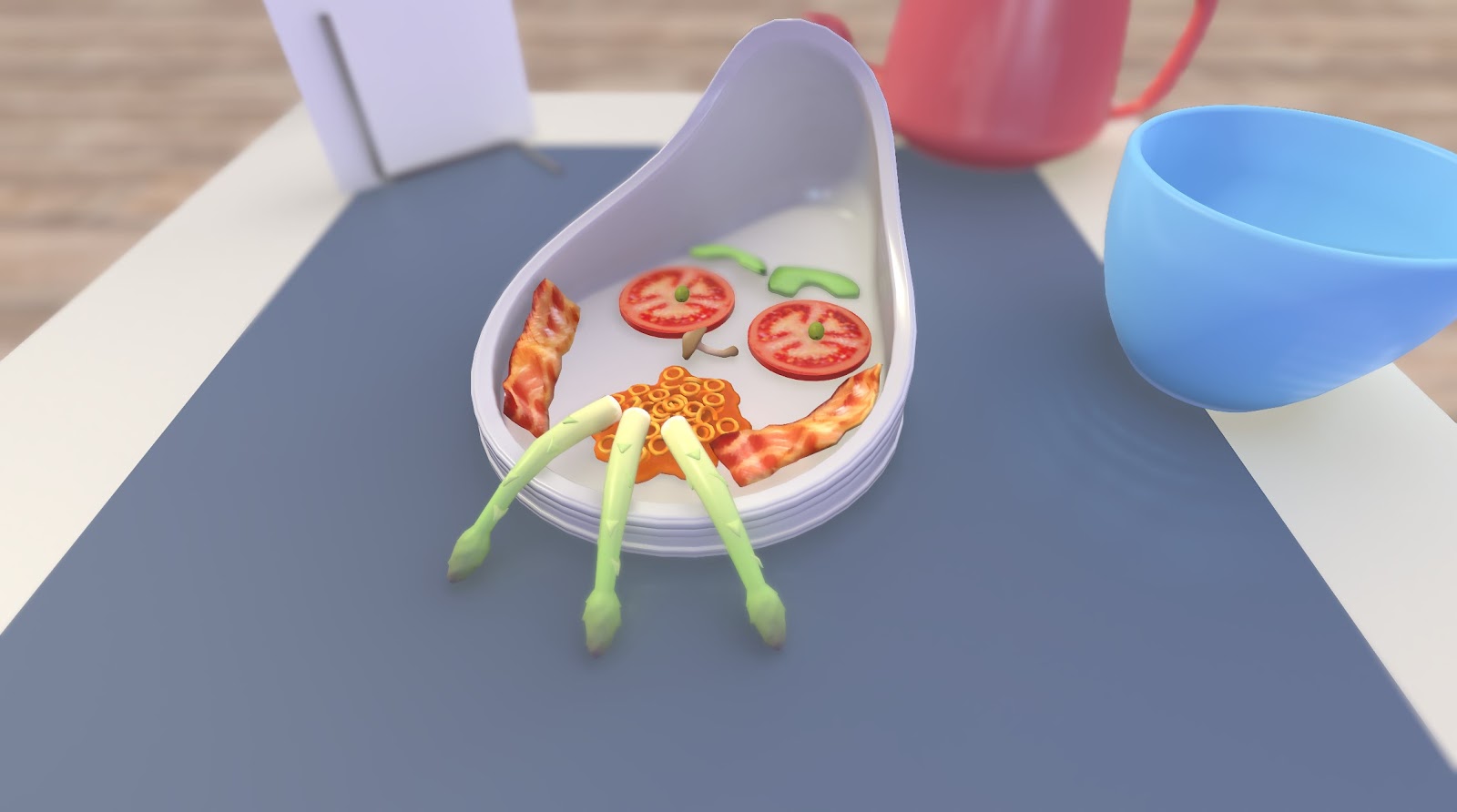 We discussed how hipsters follow a wide variety of trends, and so long as they do it before it’s cool, they don’t mind who they are mimicking in their style of dress.

A classic example is the lumberjack hipster, where the fashion was to dress as if you were working in the woods, even though they were really on a mac in a café waiting for likes on their latest insta post. We spitballed a few possible subcultures they might mimic in the future and added a little over 30 different possible hipster fashion trends. 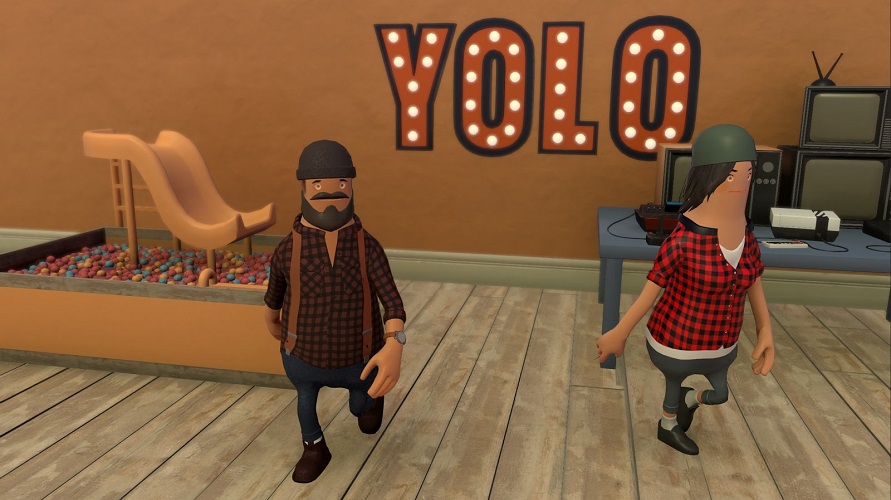 I made some 3d models to serve as examples for my artists and found an icon pack that I totally stole all the colours from. I liked the idea to keep the upper body of everything long, and the lower part short. 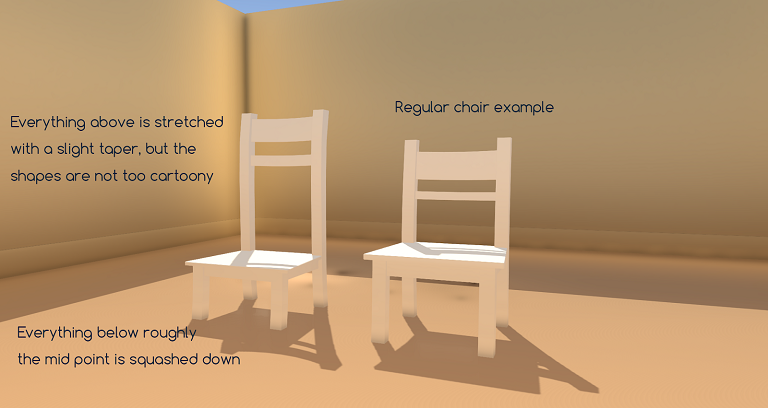 I wanted the game to feel a bit like an architectural diorama shot with a long lens so you get a tilt-shift effect. Basically it looks blurry both in the foreground and background of the image, even though you don’t feel the perspective as strong. For the main menu, I wanted to slightly mimic the “dock” on a mac, so prospective hipster players would feel right at home. 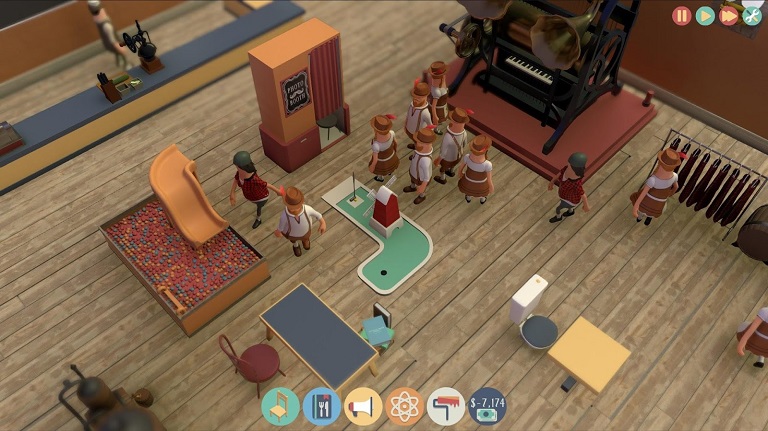 Right at the start of the game design process, I started by making a mockup of the User Interface, with an icon for each screen that I wanted to have in there. Then I took a screenshot of either some stand-in 3d models, another game or any other interface I can find that serves as the inspiration for what is going to be on that screen. I think this makes it easier to get a feel for what the idea is, and it makes it clearer to follow what the overall idea was. When you work on a game for a long time (and all games take a long time), it can be easy to lose your way into the details, and then these things are good to refer to as they contain a distilled version of the overall vision. I quite enjoy looking at these now, and seeing how they compare to that original idea. A big source of inspiration was the game Pizza Tycoon by Cybernetic Corporation / Software 2000 from 1994. Another big one was the reddit thread wewantplates, which serves up some fantastic images from hipster cafés and restaurants from all around the world. 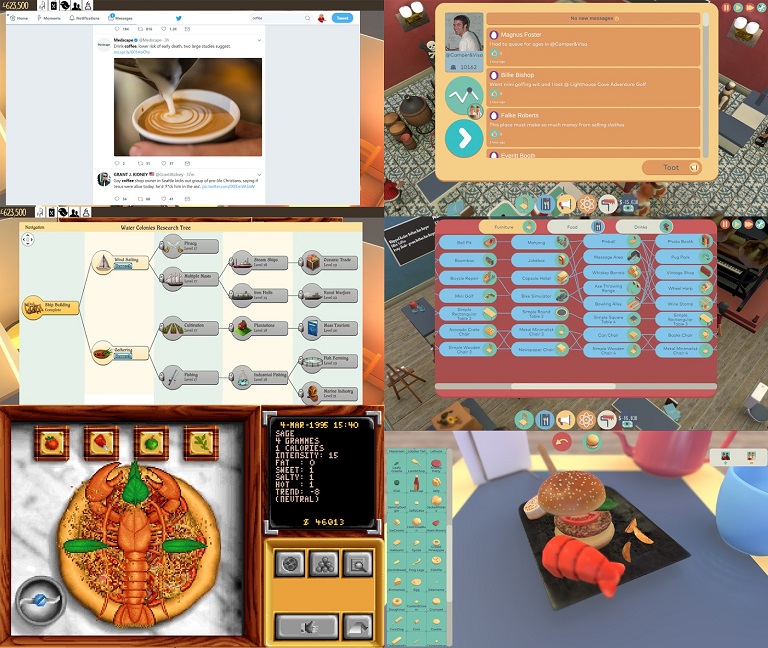 Our friend Jimmy from Loading Bar said he wanted to have a booth at EGX Rezzed 2018, and said if we could get our vertical slice done by then, he would feature it on said booth. This provided us both a natural deadline for the vertical slice and an excellent opportunity to see if we were on to something by having people come and test it for themselves. We hurriedly cobbled things together and although we felt that the duck-tape was still visible from the build we had completed on the show floor during the setup time, the playtesting actually went pretty well. We had 4 computers set up on the table, and lots of lovely paraphernalia that Jimmy had organized. From the playtesting at Rezzed we learned that lots of people liked making virtual food, but that some of the other game design ideas needed more work or to be replaced completely. 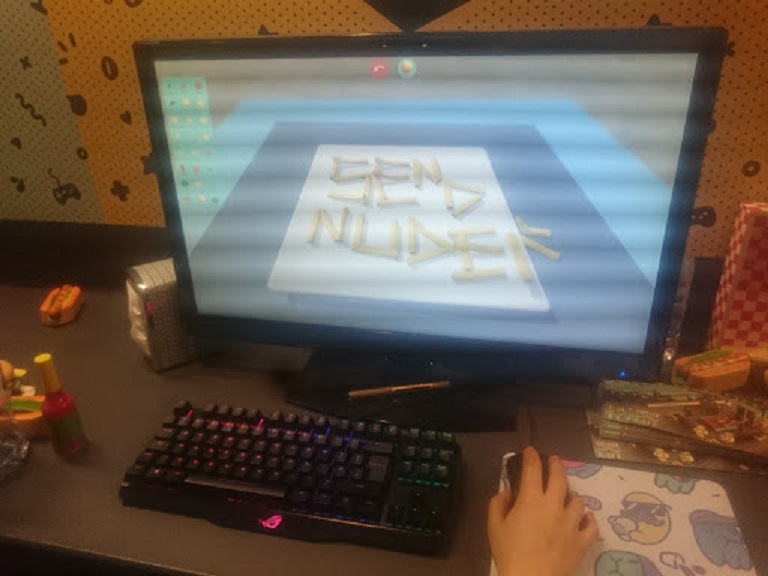 Someone at EGX chipping away at the game demo

The idea stage is the fun part, and after that comes a long period of work that is the actual making the game part. It requires an incredible amount of dedication and time to get done, especially if you are only able to work on it part-time as I am. My day job is as a Technical Director at Nexus Studios. In the time it has taken to get to anywhere near completion of Hipster Café, I’ve started and finished a stage show for U2, a digital ‘living sculpture’ installation for Brighton University, an AR volumetric video installation for Dallas Cowboys and am near completion of a similar project for a palace/museum in South Korea. Each of those projects have taken on average about half a year.

I usually get about 1 day a week plus evenings and weekends to work on the game, and although it is coming along, the road has been long. We’ve composed a little over 2.5 hours of music, made 32 different types of hipster, 46 entertainment items, 78 wall decorations, 81 food items and much more. I’ve stopped guessing at exactly when it will be done, but it should hopefully be soon (and I mean it this time). In the “production triangle”, they say, Cheap, Fast, Good, pick two. Since Cheap was already picked for us (it’s an indie game after all), the only one that could really be thrown out was Fast. I really hope it comes out Good. 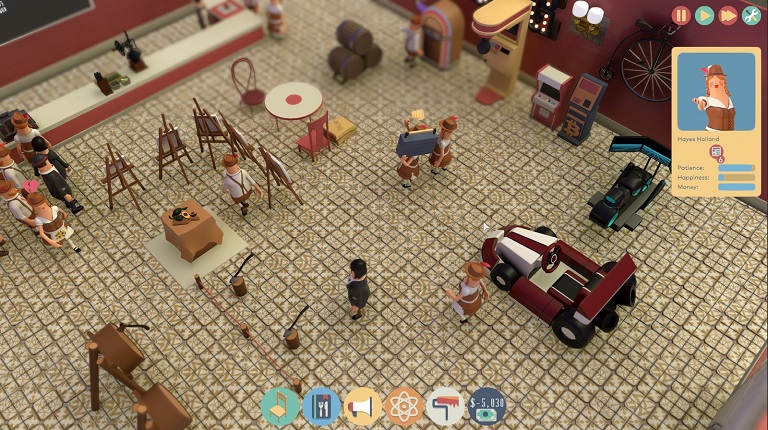 Here is a link to the steam page so you can wishlist it if you like. The initial trailer says it’s coming to steam in 2018 and that is provably untrue at this stage, but it will get there eventually.