Street Fighter II was one of the early “Did you know you could do…?” games on the fighting game circuit. While gamers were sucked in by the bright colours and sounds of the arcade machine’s attract screen, they stayed for deceptively deep gameplay. The best fighting games are the ones that take the concept of “rock-paper-scissors” and build layer upon layer on its foundations. Street Fighter’s appeal was you were never outgunned when you lost. You were just outwitted. Learning Street Fighter is just like learning another language — first you pick up basic terms, then you learn to string some sentences together, like a “Down, Down-Forward, Forward + Punch” for a Hadoken. Before long, you can find yourself “speaking Street Fighter” without a moment’s second thought.

Of course, like learning any language, the quickest way to pick it up is to take yourself out of the classroom and put yourself into the native climate. Which is where the arcades come in….

Street Fighter II dominated the 90s arcade scene. DOMINATED. Dominated in such a way that it is hard to articulate to the modern, post-internet, post-mobile phone, 64 player multiplayer online gamer.

It was in the arcade where Street Fighter II went from “very good game” to “culture-defining piece of entertainment”. The arcade served as an incubator to the videogame scene — it was Reddit thread, gaming room and communal hangout all rolled into one. The only bar of entry was a couple of quid to lay down for a game. 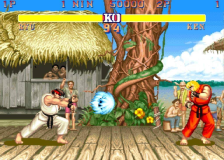 Only, you didn’t just lay down for a game in the early arcade scene. Depending on your arcade, approaching someone for a match of SF II was akin to challenging someone to a duel. You’d go up, stick your pound coin down on the side of the machine. *Blam*. A “I got next” message to everyone in the local vicinity. For if the London arcade was a stomping ground for all manner of beasts in the 90s, there were all manner of beast slayers traversing the land trying to put them to the sword.

As for Grendel’s lair? Well apparently, that was housed somewhere in a cab rank in Kings Cross….

Street Fighter always leant itself well for rumours and urban legends. “You must defeat Sheng Long to stand a chance” was a rumour that ran for years before it got revealed as a hoax in an old gaming magazine. For me, there was always one Street Fighter rumour that stuck. The rumour of the cab rank arcade machine…

So the story goes, there was a black cab rank in Kings Cross that housed a Street Fighter II machine throughout the 90s. For ~some reason~, the machine became the meeting point of some of the best SFII players in the city. You’d turn up to the cab rank, play your game and (supposedly) loser paid for their opponents cab ride home.

It’s one of the most interesting Street Fighter II legends I ever heard. Entirely plausible and (you would think), easily provable. So with a smartphone, an old copy of Yellow Pages and a bit of gusto I went about proving it.

My first port of call? Taxi drivers. Such is the wonder of London, your average black cab driver probably has work experience of the city in the 90s; might one of them have any memories of a Street Fighter machine in Kings Cross? 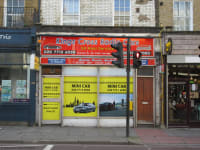 Apparently not. Talking to the black cabbie driver dad of a friend (when you live in East London, finding a cabbie isn’t too hard), their doesn’t appear to be any SFII machines in Kings Cross.

The cabbie that props up the bar in my rugby team? “I’ll ask around. I’ve never heard of it.” No memories either. Searching for a 20 year old videogame machine from people who never played a game outside of Angry Birds was proving slightly tricky.

Next, Reddit and the forums. The Internet Fighting Game community may be one of the most knowledgeable and intimidating subsets of all of gaming, but if you approach you right and pay the correct tithes, you can get what you’re after.

“Sorry I can’t help more but you might want to check with a man called Mark Starkey. I hear he bought up a lot of the game cabs from King’s X.” said one intrepid wanderer on a Reddit thread.

And so, it was onto my final lead — Mark Starkey, longtime London arcade gamer, who’s been on the scene since 1989. Would he be able to solve the taxi cab rumour? Was it real? Or simply schoolboy rumour?

“Unfortunately, your schoolboy rumour was just that”, Mark says.

Defeated. But was there a Grendel’s lair where top Street Fighter II players met?

“Oh absolutely, if you were one of the best of the best, you would head to Casino (that was confusingly the name of the arcade), by London Trocadero in Piccadilly Circus. There was a man, John Sturges who was an official distributor for Capcom arcade board. Everything that came into the arcade came in through him. If anything, he was the grandfather of Street Fighter scene in the UK.”

Also great was the nearby Namco Wonderpark (which closed in 1998 and oddly featured in Channel 4 sci-fi series Ultraviolet, starring Idris Elba). Both arcades would see a lot of tournaments over the period, where top tier players like (Current SFV Guinness World Record holder) Ryan Hart would pop up and hone their skills.

London Trocadero also had some good players as well, and as Mark tells me, gamers would do player similar to a pub crawl, starting in one arcade, and slowly traversing through Central London, late into the night, exchanging battle and beers and smiles with other gamers.

But why track down these arcades? Was it the people who turned up? Did it have a good vibe? Was it just nice to be in the heart of London?

Actually, it’s a combination of all those things, as well as a few tips from old 90s machines.

“Most of these machines were made in the UK and Europe because it was cheaper to make machines in the homeland out of chipboard rather than import steel and plastic over from Japan”, explains Mark. So not only could your version of Street Fighter II vary, so too could the quality of your experience.

“Games were played in 4:3 rather than 16:9 ratio. Back in the analogue era you didn’t have software to process the imagery, so the pictures shone on the screen like lights. People would gravitate to the places that had the best machines for imagery, like SEGA’s big 50 inch cabinet called the Super MegaLo or on a rig called the Electrocoin Duet”. Like the top tier SFV player looking for the best fight sticks, so 90s arcade gamers would track down machines that gave them a better experience, and it was Casino and Wonderpark that held the best machines.

So what about my quest for the taxi rank? Did it ever exist? Well… Maybe.

“I’m not saying the cab rank didn’t exist and that good players never went there. For the most part, you got your arcade kicks wherever you could find them. The first time I completed Street Fighter was in Burger King”, says Mark. “The big arcades around the seaside also got some pretty good players. But for the real real, hardcore, biggest scene? It’s got to be central London arcades. There’s nothing bigger than that.”

So, it appears that the mythical SFII machine in a cab rank is just that. Mythical. At least… unless you, dear reader have any further information for us?