Over the years it has cemented itself in the bestseller lists and very few come close to how impactful it’s been in tabletop gaming. Considering its success, it’s interesting how unassuming and unknown the makers of the game are to the general public.

And it’s because, like a marketing agency nefariously operating in the background, so are the creators of Cards Against Humanity. Why is that? Well, the eight creators behind CAH aren’t in fact game designers, they are a marketing company.

If you truly think about it, Cards Against Humanity isn’t a game, it’s a PR stunt. For the past couple of decades, PR agencies across the world have been “remixing” things to generate attention for their clients. Whether that’s pizza for bees, Christmas dinner but in a can (twice), Greggs upscaling as Gregory & Gregory or selling Apples to Apples but with dark-humoured answers.

Don’t get me wrong. It’s done so often because it works. And more importantly, it’s worked very well for the CAH company. These marketers are bloody good at their job. Can you honestly name a tabletop marketing campaign? Off the top of my head, all I know are the ones that CAH did.

Just as tabletop gaming was becoming more mainstream (thank goodness) they made more noise and drove more attention to themselves through a slew of PR stunts than any other company has ever attempted.

Not only have they managed to make noise, they’ve done it annually on Black Friday. On a day when all companies are vying for your attention, CAH marketing has risen above the rest and got noticed.

It first started in 2013, with many companies racing to the bottom with their prices to shift stock, Cards Against Humanity, zigged when everyone else zagged. They, actually, raised the price for their game by $5.

The result? Articles in The Guardian, USA Today, Polygon, Buzzfeed and more. And wide-spread attention on Reddit, a key target audience for the product.

One of the designers of CAH, Max Temkin blogged about their first Black Friday ‘anti-sale’ on Tumblr, sadly now deleted but still accessible via the web archive. In it, Temkin says it took a while to convince his colleagues, but the resulting sales for the day were “A little better than last year” [2012] and managed to hold onto the top spot in Amazon’s Best Sellers charts. Not only that, they saw a bump in sales the day after as buyers were waiting for the price to return to normal.

With quoting Max Temkin, it needs to be stated he was the subject of a number of serious allegations which saw the rest of the CAH management team issue a strong statement in response, launching internal investigations and saw Temkin leave the company.

You could consider that if that first stunt hadn’t worked, there wouldn’t be any bigger, greater attempts. But it did work. The attention that stunt generated enticed the CAH team to create an annual event, doubling down on being pointless, yet news-worthy.

The next year saw a brand new sale. To buy bullshit. Actual, real-life excitement from a bull. Which sold out in under two hours. That meant 30,000 people received boxes of shit. 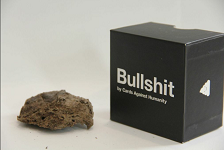 There is an interesting twist to this stunt though. This is the first year CAH donates money to charity and while I’m cynical enough to believe it might be for the added media attention it does add a more lovable roguish aspect to the stunts.

I won’t go into detail of all the stunts, from 2015 onwards, CAH has allowed people to give the team $5, allowed people to pay to dig a big hole, released a Pringle’s knock-off named Prongles, had a 99% sale off of items CAH had around their office and last year pitted their writing team versus an artificial intelligence to see who was funnier.

As the years have progressed, so has their revenue. Last year’s AI battle brought in over $170,000 to the company on the day and I’m sure countless sales of the two expansions that were created from it.

2017 things get more interesting. The makers of CAH take it up a notch with two additional campaigns that get them noticed.

The first is a continuation of their classic stunt playbook. The day after the Superbowl they post an article about the failure of their Superbowl ad. Not only does it poke fun at traditional advertising strategies but also names one of the world’s largest agencies, Wieden+Kennedy and claims they were “burdened by conventional thinking”.

If ever there was a moment to announce you’re opening up as an agency, this was it. Yet, they didn’t. They drew a lot of attention and then went back to the drawing boards to see what they could come up with next.

And once they had got their traditional Black Friday shenanigans out of the way with, they started with the second of their additional campaigns this year. With a much loftier goal:

With a taste for bigger and bolder, CAH struck again with a bigger marketing campaign called Cards Against Humanity Saves America which shifts gears to be a more purposeful campaign. Which, if you’ve ever been to a PR or Marketing panel event in 2017 (or since, I mean seriously…) you’ll know was all the rage. 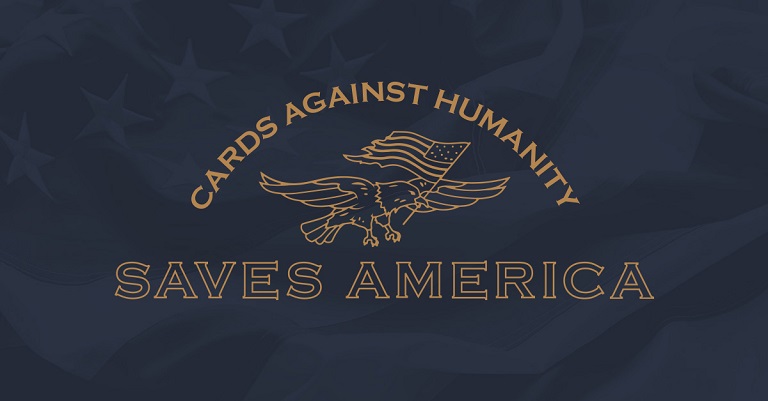 It was simple, you pay $15 and you’ll get a tiny bit of land  at the Mexican and American border to disrupt Trump’s border wall plan along with six more surprises.

However, to be fair to them, they weren’t tepid in their language. They went into it in full force.

Donald Trump is a preposterous golem who is afraid of Mexicans. He is so afraid that he wants to build a twenty-billion dollar wall that everyone knows will accomplish nothing.

In many cases, brands will make the mistake of trying to be progressive without actually taking any real action or using a completely beige language.

Your marketing experts did neither.

And it worked. They saved America got lots of media attention and sold out after a few hours.

If you’re interested the campaign website is still live today and you can read more about the surprises, which all tackled pertinent issues at the time. However, it seems to be the last politically driven campaign the company has released. Whether the work that went into it didn’t equate to sales, or if the partisan tone didn’t sit well with half of their audience, who knows.

With 2020 offering a wealth of inspiration, what’s next for the party game for terrible people? When you’ve offended everyone there is to upset to get noticed, promoted stunts that haven’t happened and seen your game stocked by every major retailer on the high-street where’s left to go? 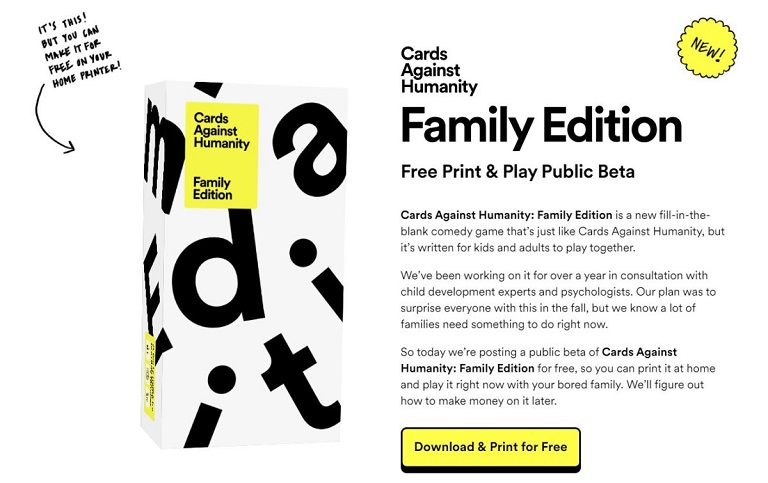 You can enjoy the print and play version for free here

For the game that set itself apart as the party game for horrible people, it’s a little jarring to see it rebooted as a family-friendly title, but with blockbuster films, video games and mainstream all targeting the lucrative PG13 audience.

A smart agency would certainly be pitching something similar, it’s marketing 101 to expand your audience segment but surely stems outside the boundaries of the company’s core values.

What’s more interesting though, is this comes out a couple of months after the company got into the news for allegations of a sexist and racist workplace. News that may have bypassed the many parents who have heard about CAH in passing & can now buy a version that all can play during the coming holidays.

Whatever your feelings towards the game, not only has it consistently sold, the people behind the game have out-marketed the rest of the tabletop industry for years. And it’s not the product that’s achieved that. The one lesson all the edge-y games on Kickstarter who hope to repeat their success should learn is, having some dark humour in your game doesn’t guarantee success.

No, it’s the years and years of wild marketing ploys, schemes and stunts that keeps people talking about you.

You thought you played Cards Against Humanity? Think again, they played you.