When you’re stuck in a small apartment with your significant other in the middle of a possibly world-ending pandemic, it’s important to stay busy. To get us through this prolonged period of isolation, my partner and I skipped baking bread in favour of the world’s oldest pastime – board games.  We decided to broaden our horizons with a strategy game, diving in at the deep end with a tactical alternate-history game called Scythe.

Aesthetically, Scythe is like a post-apocalyptic Metal Gear Solid rendered by a Soviet painter – which is to say there are some incredible character designs and the overall art style is downright gorgeous. It was this visual flair that drew me to the game but if it’s not quite your speed, don’t worry, there’s no shortage of stunning strategy games filling shelves right now. Fantasy Flight’s A Game of Thrones is a must-play for fantasy lovers and Photosynthesis puts a fascinating environmental twist on the strategy genre.

I’m a relative newbie to strategy gaming, so the setup process was a little daunting. Scythe is a huge game. There’s a cohort of playable characters, multiple currencies, and even varied rulesets depending on how many players you have (the game can be played with up to five people and includes a surprisingly robust single-player mode). 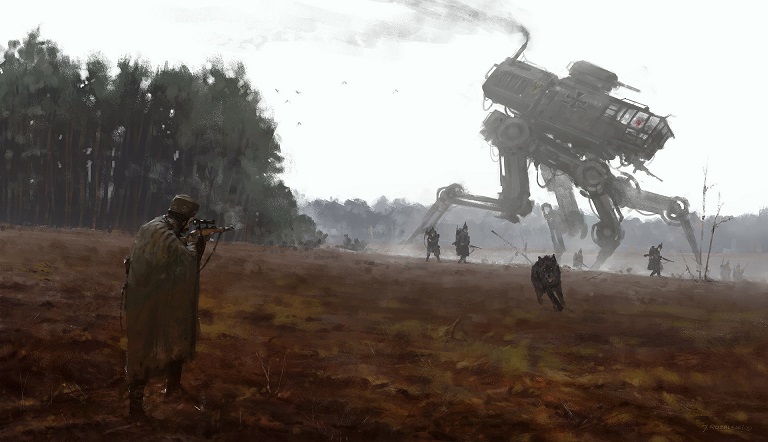 While it’s ostensibly a war game, it’s as much about resource-management as it is about combat. Taking place across a large map based loosely on 1920s Europe, this steampunk epic from Stonemaier Games is about achieving key goals before your opponents, pertaining to popularity, wealth, and military power. Although large portions of the game don’t involve direct player-to-player interaction, there’s a distinct tension that begins to build between the warring factions, especially when played with only one other combatant.

Once the pieces were on the board, the real fun began. We each picked out our characters.  My other half picked Anna, an expert marksman accessorised with a grizzly bear named Wojtek. I took on the role of Gunter Von Duisburg, a gruff commander flanked by direwolves. At this point you are presented with two distinct options: play the game straight or turn it into a sort of revisionist-history D&D-lite. We, of course, chose the latter.

Even though both characters had in-depth and wonderfully written bios, we decided to improvise our backstories based on the character imagery. The more we played, the more we got into character (and the weirder our backstories became). It may have been a symptom of being stuck indoors, or maybe it was the slightly overwhelming complexity of the game, but soon we became immersed in these fictional lives we had devised.

To chronicle this descent into madness, we decided to keep in-character diaries detailing our exploits in the game. Read on to witness a young couple lose their grip on reality as they discovered there’s a little bit of warlord inside all of us. 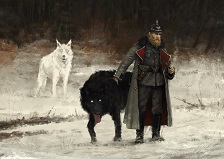 My father is the reason I must conquer Europa. He was a brilliant man – a scholar, a strategist, and a leader. One Autumn day, when I was but a boy and Nacht and Tag were but pups, my father took me to one side to teach me the ways of leadership.

“Gunter!” he would yell, “stop playing with those pups and let me tell you a thing or two.”

Unfortunately, direwolves have a keen sense for when they are being disrespected (they are quite sensitive beasts), so they ate him whole. Direwolf pups have sharp teeth.

It was on that day that I learned there was no place for weakness in this world. Once my wolves were finished devouring Gunter Senior, I set to work devising my plan to rule the known world. 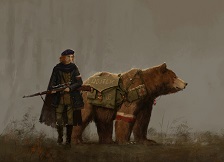 Word has reached me of a despot to the East. They say he rides a direwolf into battle, slaughtering his enemies with an evil glint in his eye. They say he cannot be killed. I say he has not met me.

I must rally my people for war, but before that, I must fortify my kingdom. We are a prosperous people but our military power wanes. It is time to consolidate our forces and reinforce our infrastructure. While the mad dog tears through Europa, I will bide my time and steel myself for the long haul. What I must practice now, is patience.

The war effort will require more resources – wood, food, metal, and oil. An enemy of this savagery demands a careful approach. We must be smart, we must develop our technology and create a weapon which cannot be destroyed by brute force. When the wolf comes to my door, I will answer him with steel and fire.

Ah, the spoils of war! My advisors say we need to gather resources from the new lands we’ve conquered – wood, food, metal, oil. Cowards! Perhaps those pencil-pushers will be my direwolves’ next meal.

Tonight the ale flows and we celebrate another victory in our glorious conquest of Europa! Morale amongst the ranks is wearing thin, but it’s nothing a little alcohol can’t fix.

Tomorrow we continue west to Saxony to spill blood and claim another land. Onward!

Thanks to the unbreakable morale of our workers, we have successfully increased our manufacturing efforts tenfold, producing new types of weapons, vehicles, and defensive measures. We have also commenced the development of a new paradigm in warfare – we call it the Walker.

This technological breakthrough is a variant of what our top scientists call ‘mechs’, walking tank-like machines, capable of transporting workers and tearing down our enemies in combat. Producing Walkers isn’t cheap but luckily we have sufficient coin from trading with our neighbours to the north.

Now, on to fouler business. Word has reached us that Gunter and his direwolves will soon be upon our territory. Our time to prepare for battle grows short. While he has gorged himself on rich food and drowned himself in wine, we have expanded our territory, built new factories, and trained more troops.

The rivers surrounding our city are treacherous, so we expect our enemies to approach from the lake to the east. To prepare for their attack, we stationed troops in all five territories surrounding the lake, shoring up our defences before they strike.

Another glorious day in Europa dawns and once more my brothers and I ride for glory. My men have eaten, drank, and raised hell throughout Europa. Now it’s time to take the final trophy and establish my reign as the supreme ruler of this land.

My opponent is crafty. I am ready for whatever her feeble army will throw at us. We will destroy them with brute force. I have my direwolves, I have my men, and I’m nursing a wicked hangover. Onward to death or glory!

It was a glorious day. They marched through the valley before first light and we met them with a volley of arrows. Our attack thinned out their ranks and forced them to the west. Here, our Walkers were waiting, armed and ready. Our mechs tore them apart with gunfire, crushing any stragglers with their huge, metallic feet. You could smell the fools pissing themselves from a mile away. But Gunter was nowhere to be found. I had to surmise that he was readying for a second strike – this time he would make eastward for the lake.

Hastily, we regrouped our forces and retreated to the lake. Wojtek and I hid, submerged under the water, waiting for any sign of Gunter. We had one goal: end his tyranny once and for all.

The fool never saw it coming. Before he knew it, I was sinking my blade into his thick skull and he was sinking into his watery grave while his force was fleeing.

Now that the war is won, it’s time to count our losses. Once that’s done, maybe it’s time I do some conquering of my own. As for Gunter, he survived with some significant cranial damage. I now have him working in my keep’s kitchens… washing dishes.