If one were so inclined, one could spend a whole afternoon sitting on a wooden stool, attacking imaginary musclemen who pose a threat to your virility, spending coin after coin, waiting to see if another human challenges you. And you wouldn’t even have to move stools. Because all 1000 games have been crammed into a single lonely arcade cabinet, a sad reminder that there are now more retro videogames than rats, and even the rats aren’t interested in playing. But I am. And there must be somebody else in this city who is. Here’s the deal:

I have 10 euros in my pocket. I will play Street Fighter until I make a friend, or until my money runs out. Let’s go.

The burger joint is really a bar in Bilbao that sells fancy burgers as a side hustle. It’s a trendy place in the middle of Casco Viejo (that’s “Old Town” to non-Basque scum like you and me). It has a Ken doll crucified on the bathroom door to denote “males” and paper bags on the lights, I do not know why. It is that sort of bar. I enjoy it. 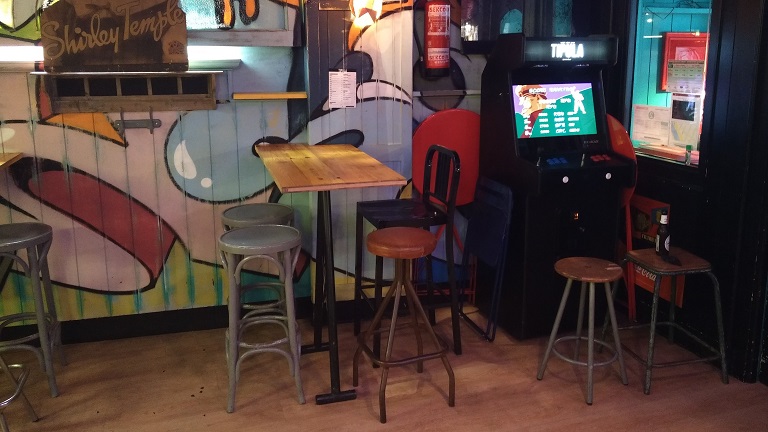 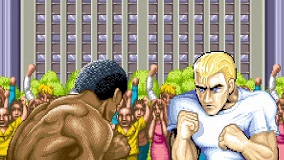 On the arcade cabinet housed within, you get a big menu of 1000 games. From the moment you insert a coin you have 99 seconds to find and select the game you want. A suspenseful challenge. But speedy navigation of the megalist results in plenty of choice. I have 10 euros. 10 big silver-and-gold boys, two credits for each one. That is enough money to sample approximately one whole percent of the Street Fighter variants in existence. Let’s see what’s here. Street Fighter II, Street Fighter Alpha, Street Fighter II Champion Edition, Street Fighter II… M7? Well, let’s begin with the most vanilla games, and work my way through the list.

It’s not long before I am summarily destroyed by Ken in Street Fighter II, and sliced to bits by a dismissively speedy Vega in Street Fighter II Turbo: Hyper Fighting. I look around between defeats at the machine’s hands. So far, there’s only one other customer, watching videos on his phone. His earphones shoved firmly in, probably to drown out the repetitive screams of pain from my fighters. The refrain of YOU LOSE echoes into the bar with such force, I instinctively try to find a volume button.

There is no such button.

I make short work of Birdie in Street Fighter Alpha, which gives me room to breathe. I slink back to the garish green ubermenu of the cabinet and select the suspicious-looking Street Fighter II M7, ignoring Street Fighters M2 through M6 for fear that my 5 remaining euros will be eaten alive by doppelganger versions of the same game.

My fears are well-placed. The mysterious M7 is a hacked version of the game where the normal rules of urban pugilism do not apply. Opponents will warp behind you, they will change character mid-fight, swapping from Guile to E Honda in a blink. I only manage to survive a fight by spamming Blanka’s electric attack and sliding across the floor in a manner that is impossible in non-hacked versions. Here, mainstay biffer Ryu burps out two fireballs with every hadoken. It is horrible. 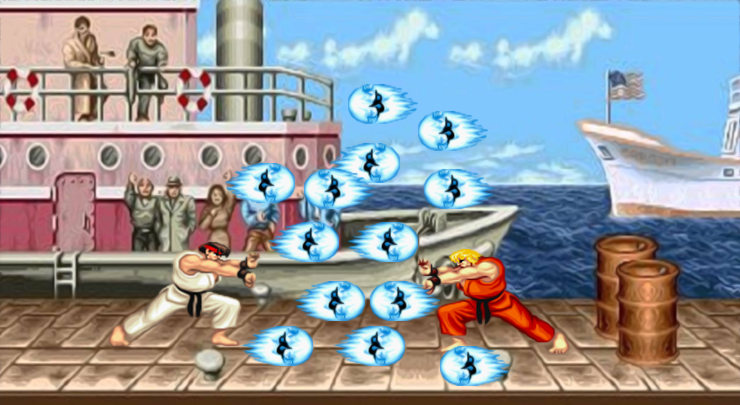 Just a completely normal SF2 match nothing to see here

The bar is still quiet. I continue to pump my dwindling “make a friend” fund into the big box of bright flashes. I turn to look whenever the door opens, seeking eye contact with any would-be challenger that might arrive. A woman trolleying boxes of food rolls in, paying me no attention. Fresh bar staff arrive and change over. Now and again, a customer comes in, orders a drink, and leaves to sit outside. Everybody ignores the documentary about Britain playing mutely on the TV. It is hard to make friends.

You know where this wouldn’t happen? 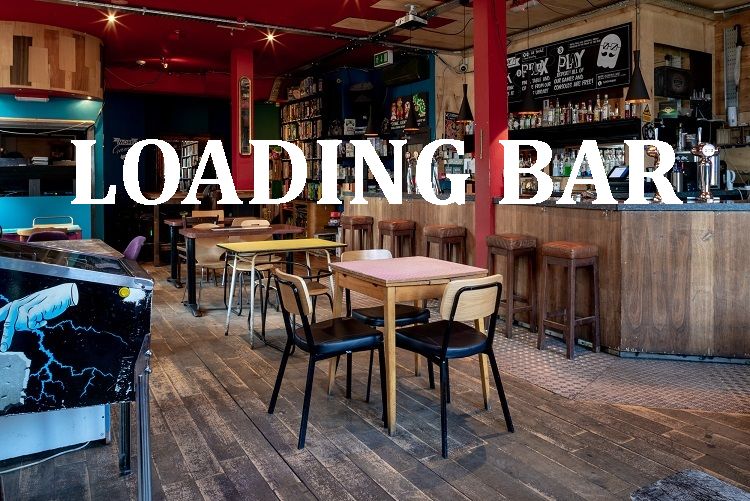 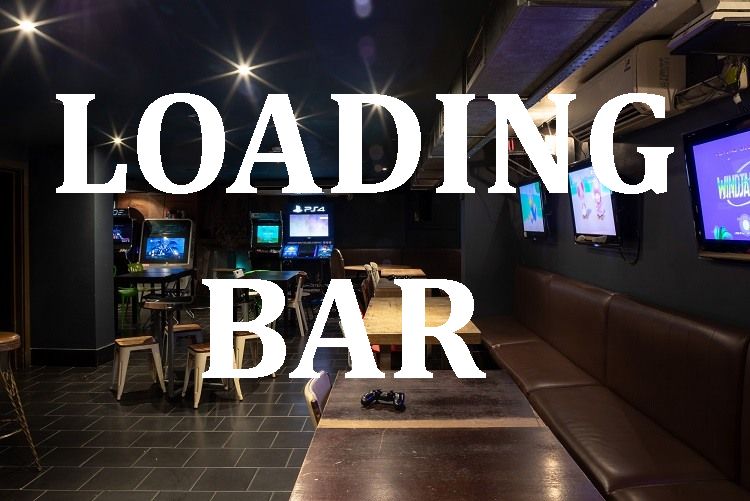 That’s right. The trestle of fancy words you have been dutifully descending for the past 9 paragraphs is, in reality, an elaborate hanging garden of sponsored content. You are a fool to have thought otherwise.

Allow me to flash back to six years ago, to the evening I was tasked with drinking numerous cocktails at a bar in London, wherein I was plied with free alcoholic beverages with names such as “Skyrum” and “Assassin’s Mead”. All offered by a strange man with intimate knowledge of arcane substances. That man was Jimmy. His bar? Loading Bar. It is an alliance that has lasted until the present day, when Jimmy contacted me with the salacious offer of hard cash for pretty words. I have never pretended to be an honest writer. Nor a wealthy one. I too, must find enough financial reserves in this hideous new decade to pump euro coins into the machines of foreign lands, while sipping alcohol-free bottles of false beer, because, yes, for reasons beyond the scope of this elaborate advertisement, I no longer drink. Why should I? I don’t need alcohol.

Yet there are some things I do still need. Videogames. Friendship. Exactly the type of thing you can find at: 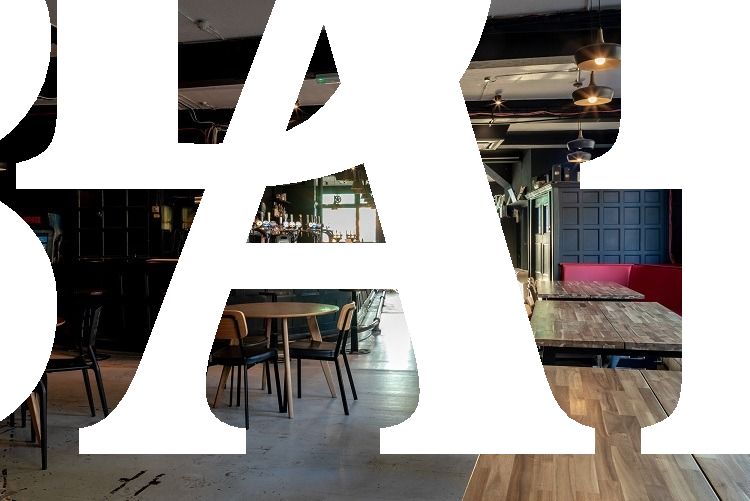 Or here in the burger joint, perhaps. End of sponsored message.

For the final fight, I load up Street Fighter Alpha 3. A game whose colourful splendour hasn’t dated as others in the fighting game repertoire have. When this came out in the late 1990s, it was punching alongside the likes of 3D brutalise ‘em ups such as Tekken 3. An era when cartoonish 2D graphics were being made obsolete by uppity triangles called “polygons”. But today, which looks better? The flickering puppets of early Tekken, or the lush animations of Street Fighter Alpha 3? This is a rhetorical question. Please, do not comment. 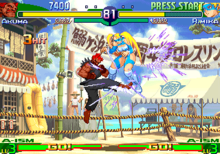 The intro cinematic is roaring at me with colour. Shouting words in a millisecond flash, phrases like: “Born to fight!” and “Triumph or die!” and “Go for broke!” A fitting command. I am down to my last euro. I pause to look around, stall for time by checking my phone. The bar is still empty.

The fight does not last long. My stretchy-armed Dhalsim is pitted against computer Gen, a white-eyed Chinese assassin. It doesn’t go well.

“We will all die,” he says astride my beaten body. “The question is when, why, and how painfully.”

The familiar chorus of failure yells my deficiency across the entire bar. The countdown of arcade shame. 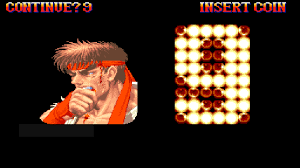 I pay for my fake beers, and make to leave. I put my hand on the door, and that is when Josu walks in. A fellow thirty-something, with gelled hair and one of those piercings that stretches your earlobe beyond recognition. I don’t know him yet. We have yet to fight.

He looks disappointed. This is it, I think, this is the friend I’ve been waiting for.

At this he gives me a “yes”. But it is not an English “yes”. It is a Basque “yes”, head down, eyes wide, lifting up in tone as the “sssssiiiii” comes out with a smile, the cry of an excited snake who has finally found a rat.

We settle in on the wooden stools and introduce ourselves. I pump in another euro. Josu has played Street Fighter before, he says, but only as a child. Now, he is looking around for someone on the character select screen. Who? I ask. Chun-li, he says. She’s there. But I have pointed it out too late, the counter has already hit zero. Josu looks sad. That is until his autopicked character arrives on the fighting stage, surrounded by bunting, bells and meditating monks. 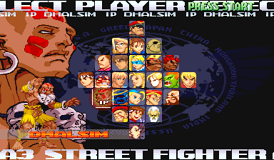 His eyes light up. He remembers this. He remembers this! Josu goes to town, his stretchy-armed Indian quickly whacking seven shades of shoryuken out of my Ryu. The hadoken is useless in my hands next to this furious and unpredictable human competitor. They come out like big wet spitballs.

Josu is throwing all his weight into our fights. He throttles the arcade stick with vivid panic, slapping multiple buttons at once, animated in a way I have long forgotten. The cabinet is being yanked away from the wall, and between rounds we have to shove it back into place. Unlike me, who suckled on the teat of videogames long after it was considered psychologically healthy to do so, Josu let gaming take a back seat in life. He doesn’t play at home, it’s just something he doesn’t do anymore. This must be a rush, I think. This must be what taking ecstasy at 40 feels like. Whereas I am calm in front of an arcade, happy but calm, Josu’s entire childhood is coming flooding back to him in the form of a full-blown fighting game seizure. It is wonderful to witness, and a little frightening.

He beats me two games to one. My tactic of spamming Blanka’s electric power does not work, it transpires, against educated humans. Counter to the laws of the arcade, he concedes the cabinet and its subsequent CPU fights to me, because he has a table of pals waiting outside, and they are probably wondering where the hell he’s gone. He leaves me with an encouraging pat on the back, all adrenaline and joy. When I emerge from the bar later (after my customary drubbing at the hands of the all powerful machine) he spots me and smiles a final goodbye.

Ultimately, I failed in my challenge. It took 11 euros to make a friend.

Maybe this is the point I want to impress upon you, reader. Friends are not bought with hadokens and side-eye, they are not invited into your sphere of lung gas at random during a severe health crisis. Sometimes, they will come when you have given up. At your lowest ebb, when your final coin is spent, when you are ready to throw in the towel, when your hand is on the door. With friends, as in Street Fighter, go for broke.