Sometimes I see a nice sunset in a game and think to myself ‘I would love to have a pint there’ then proceed to lift my cumbersome body and stagger towards the fridge for a cold beer. My in-game counterpart doesn’t have the same anthropomorphic advantage. They remain sober after so many days of saving the world, whilst in reality I’ve got a little buzz on and a takeaway menu dangerously close to me.

Whilst waiting for my food, I thought about all the places in games characters could visit for a refreshing drink. Allow me to take you on a tour of pubs, taverns and bars where NPCs and protagonists can bump elbows and share stories over a frosty one… 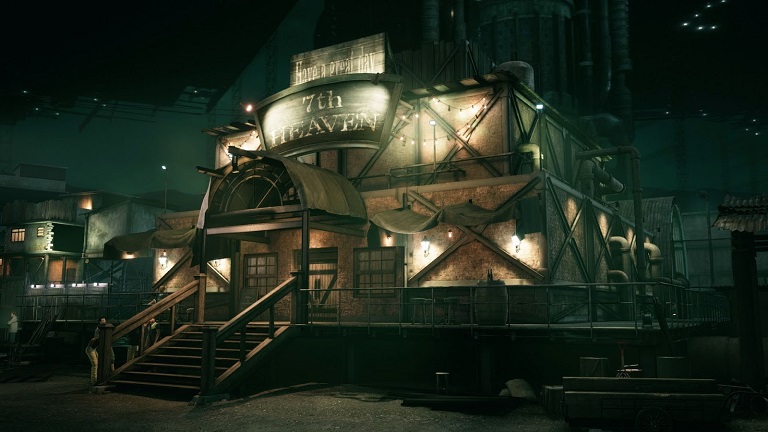 This is probably my personal favourite bar in gaming, I’d be considered a local down at the Seventh Heaven. Playing the original as a child and the recent remake, I’ve accumulated many hours drinking and playing darts in this honourable establishment. Tifa owns and operates this bar whilst assisting an undercover group of militants, there’s never a quiet night.

There are a number of vibrant cocktails on offer, from the Cosmo Canyon to the Lifestream. There’s a jukebox in the corner that plays Certified Bangers and a dartboard to spark up some local competition. In terms of mini-games, Square Enix need to put less effort into the squats and more into the darts. I want to feel like van Gerwen when I nine-dart Wedge and leave him regretting the day he ever challenged a man with too much time on his hands.

Once you’ve worked up an appetite playing darts, Tifa can knock you up a wide range of grub which the citizens of the slums deem ‘very good’ – that’s the equivalent of a Michelin star around here. The final feature of the bar is a retro pinball machine, however if you attempt to play the machine you may be lowered into the basement of the bar and initiated into a group of freedom fighters. They really need to put up a sign. 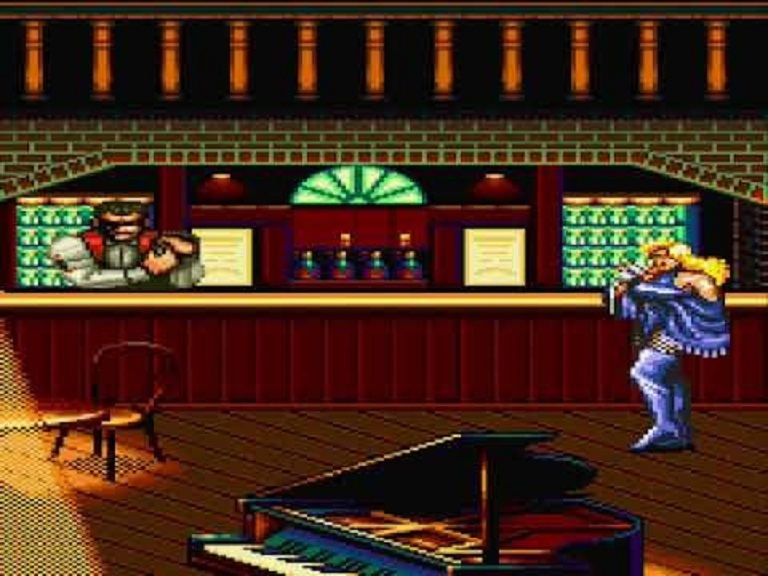 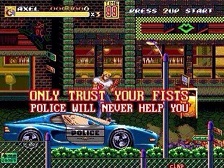 Say what you like about the atmosphere on these streets but you leave Barbon’s bar out of it. This lovely little speakeasy is a welcome break from the city hustle, the bartender makes a mean old fashioned and the grand piano suggest they have occasional music nights – this place exudes class.

If any riff-raff become lively and start causing trouble in the establishment then I’ve heard the local police officers are quick to resolve things, though the owner does make a habit of dealing with trouble himself. This would leave an NPC free to join in the action if they so wished to, for the price of a few beers you can leave this fine boozer feeling like Patrick Swayze in Roadhouse. 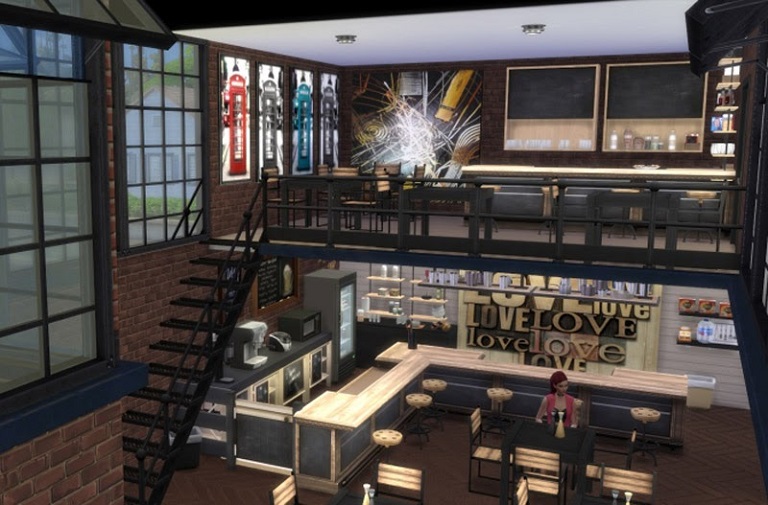 I’m not the biggest fan of the series myself, however I’ve spent my share of hours creating functioning neighbourhoods for my masses before destroying their lives in some form of therapeutic disaster simulator. In Sims 4, you can construct your own swanky bars and restaurants if you have the coin. Isn’t life in the Sim universe already challenging enough? Then you throw an addiction to alcohol into the mix? You can’t flaw the sense of realism in this game.

WAIT… a small amount of research has revealed to me that Sims don’t drink booze? They rely on juice to get by? It’s good to see the developers are trying their best to avoid leaving another generation reaching for the bottle but we are a lot wiser than that. You think Sims don’t drink? You couldn’t be more wrong.

Have you HEARD a Sim talk? They are chatting incoherent babble, don’t tell me it’s Simlish please – give me a four pack of Guinness and two whiskeys, I’ll be fluent in ‘Simlish’. The second you log-off for the night, the Sims get wild. The juice is packed with alcohol and they are all on it, looking for a bit of WooHoo. The morning rolls around and they’ve all pissed themselves and need help getting out of the pool. All this means their ‘juice’ is some strong stuff and I would love to visit a Sim’s bar given the chance.

NB: The same nightlife rule applies to Animal Crossing, all the villagers gather in a wooden shack and down moonshine to drown the sorrows created by Tom Nook’s capitalist agenda.

Everybody’s Gone to the Rapture 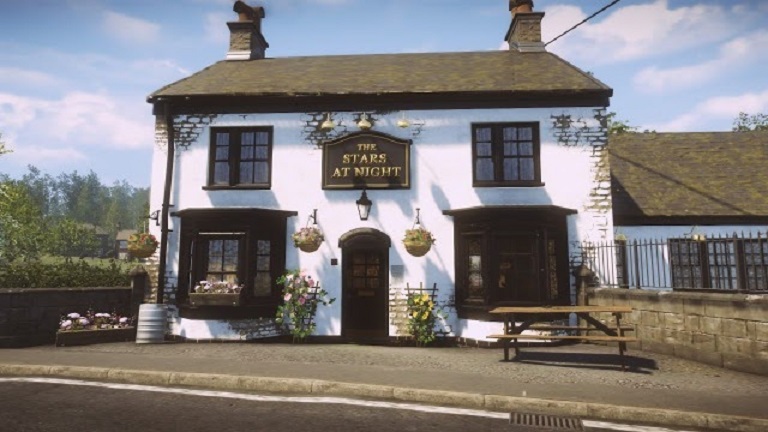 In complete contrast to the last, this entry is less about a wild night out and more about embracing the solace. Everybody’s Gone to the Rapture takes place in a lonely English country town called Little Tipworth. Lonely because all the occupants have experienced a slight holy acquisition.

Which means the pubs are empty. There are two in the town so take your pick and mosey on over to your own private-public house, the drinks are free. Assuming in this circumstance I just popped out for a smoke and missed the rapture – I would want a pint.

During the events of lockdown and coming out of it, I’ve been to a few pubs who practise social distancing and learnt to enjoy a pint on my own. It doesn’t really get more alone than this but if you’ve got a few podcasts to listen to I’m sure you’ll be fine. Forget about the fact you didn’t get accepted for a better life.

Did I mention the free drinks? 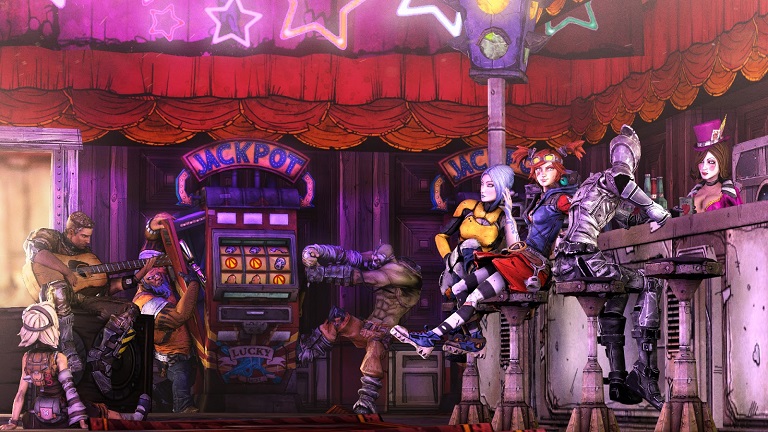 Pandora is a horrible yet unique world, bandits roam the streets, beast rule the land and there’s a war taking place between massive military manufacturers. Through all this chaos, in a city fittingly named ‘Sanctuary’ you will find Moxxi’s Bar. It’s a welcome alehouse that plays the music low, pathing the way for prominent voice acting to take place. I would share a beer with a number of the vault hunters, but it would be Handsome Jack you’d want to hear stories from.

Named after the voluptuous cougar that owns the joint, Moxx-tails are the drink of choice. We’ve got everything from the eloquently named ‘Penargilon Kangaroo’ to the more simple ‘Brick’s Fist’. Once consumed they grant a number of bonuses that any budding vault hunter could quickly become addicted to.

If you are wondering what these concoctions could taste like then check out the Borderlands-themed drink created by the guys at Loading Bar.

Also note the bar can sometimes fly on ship so that’s takeaway pints confirmed in the Borderlands universe.

After a certain amount of time, I thought I better ask some friends to ensure that this virtual bar crawl I was assembling was approved by other functioning alcoholics… 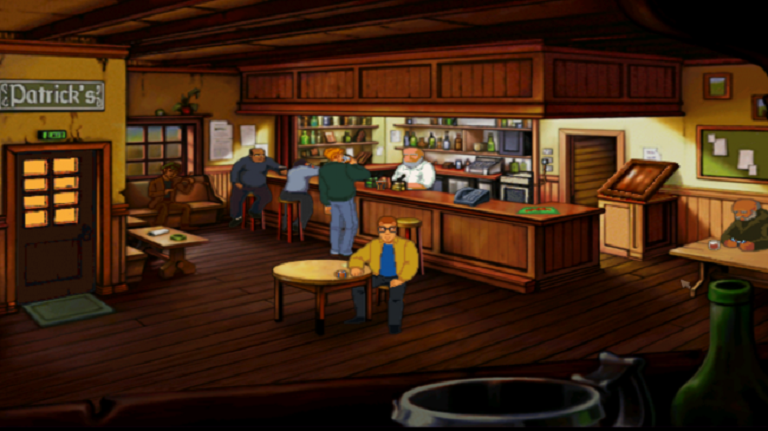 Mac Devitt’s is a pleasant pub tucked away on the cobbled coast of Lochmarne in Ireland, though the location may be fictional I can tell you it’s pretty close to most rural Irish bars. There’s one bus a day from Dublin that runs there and when you arrive there’s a warm pint of real ale waiting for you – served properly in a pint glass. None of this London nonsense where you get a cold Guinness in a chalice.

You can take out a room with a marvellous view, at night there’s a sunset that would make Kevin McCould blush. If you’re looking for food then you are in the wrong place, their menu simply lists ‘no food today’ but like most small villages by the sea in Ireland you are never too far from someone who will sell you fish. Walking there after the pints is the issue.

They don’t get much more wholesome than this, Mac Devitt’s made me think about other adventure game boozers like the biker bars in Full Throttle, The Drunken Druid from Simon the Sorcerer and the location I probably had my first underage virtual beverage in – Scumm Bar from Monkey Island. The nautical soundtrack still plays in my head till this day. 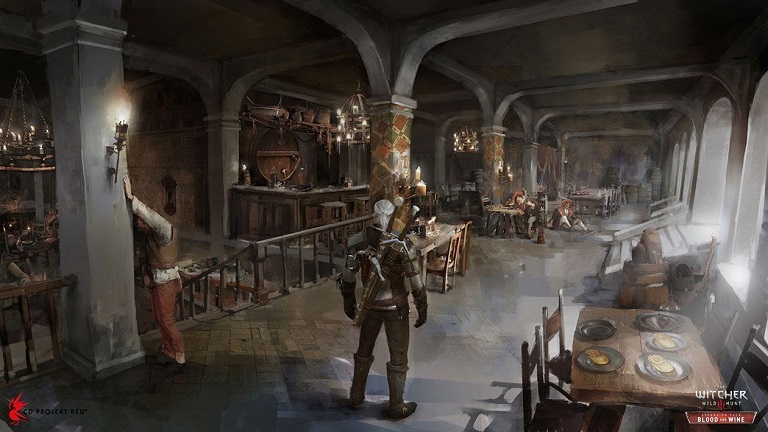 Let’s be honest, when I mentioned the word ‘tavern’ earlier this is where your mind went. This or Skyrim, Amalur, Dragon Quest – basically whichever huge mythical RPG you chose to spend your days roaming around. The reason I chose Witcher for my virtual pub crawl is simple… Gwent.

I want to sit down with my tankard of mead and enjoy a few rounds of Gwent against the locals. Scamming coins here and there in order to purchase a chicken dinner straight from the back room of the tavern. I’d wait for a witcher to show up and then hand out ludicrous fetch quests purely for the thrill of it.

There are bards, dancers and the occasional fisticuffs, entertainment is bursting out of the seams of this place. I’ve heard if you walk down the back alley there are people who can stock your gourd full of exotic potions for the right price – just don’t try to ride home after.

We’ve reached the end of our first crawl, we’ve sunk many pints and I think it’s time for a water and bed. I’m sure there are plenty of locations you’d love to see added to the list, so shout them at me on Twitter.

A few people mentioned GTA, Mass Effect and other clubs so my next article might have to be a night out on the virtual town – clubs and greasy places to eat after your night. Until then, drink responsibly and always tip the bar staff.